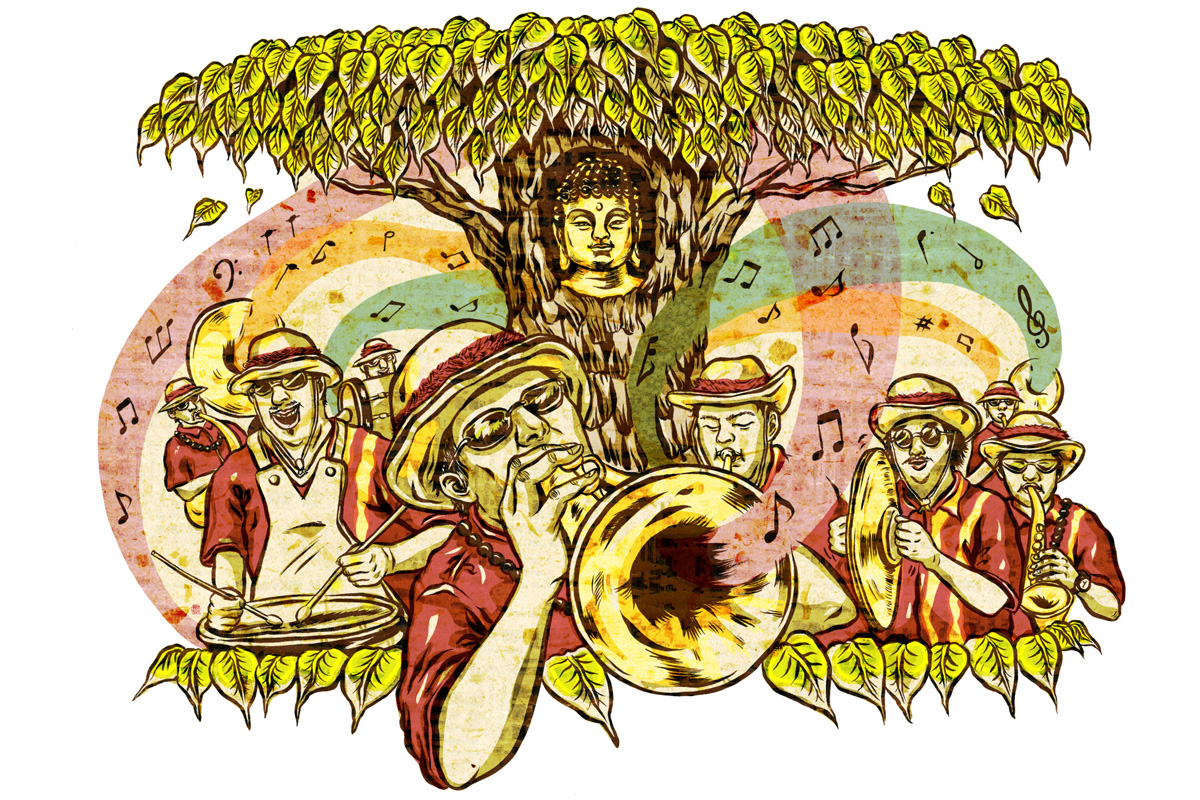 In Buddhism, everything is optional.

So the question becomes: Why bother with morality? What’s the point? What is morality anyway? Where does it come from? What effect does it have? Why should we care?

Many people think of morality as a set of commandments given by a supreme being; a list of orders given by an indisputable divine authority. This is what I was taught by my parents when I was a child: God said not to do certain things, so we shouldn’t do them. End of story. There’s no arguing with God because, well, it’s God. This rationale worked perfectly well for me until I stopped believing in God – at which point I naturally stopped believing in morality as well. I was 13 at the time, and it was a stunning revelation for my young mind to discover that I could do whatever I wanted. So I embarked on a grand quest of unrestrained self-indulgence which lasted several years, guided not by any principles of right and wrong, but only by the principles of what I wanted to do.

Those were the most miserable years of my life. This seemed counter-intuitive. Shouldn’t total commitment to the self-centered pursuit of hedonistic pleasure naturally lead to happiness? Why was I so unhappy? So I branched out. Simple hedonism wasn’t doing the trick, so I started looking into more complex forms of hedonism. I kept seeing meditation mentioned in various places – such as in psychology research, on new age websites, and in pseudo-spiritual systems of various kinds. I often saw it touted as a method for becoming happier (as well as a few much more grandiose claims). So I started thinking that meditation might help me squeeze more pleasure out of life. It seemed simple enough; I just looked up meditation instructions on the Internet and started following them for a few minutes every day. Meanwhile, I spent the rest of my free time immersed in my usual reckless pursuit of sensual pleasure.

Over time, however, something began to shift. As I started to develop a limited degree of proficiency with the meditation technique I was using, my mind became increasingly peaceful and content – not the excitement of intense sensual experiences, but rather a gentle sense of subtle joy that seemed independent of what was going on in my life. This was intriguing: I didn’t have to take any drugs, or find a sexual partner, or go to a nightclub; all I had to do was sit still and focus my mind for a few minutes everyday, and my baseline emotional state would be a bit happier. This seemed worth further investigation.

With this initial experience of positive results from meditation, I gained a certain degree of confidence that meditation works. So while I was not interested in religion, the success I was getting from using one Buddhist technique led me to explore what other techniques there might be that could be of benefit to me: I figured I could just pull out the bits I wanted and leave all the rest behind. Thus at last I came back to the subject of morality, after a seven-year hiatus. Now, however, I was coming to it not out of a sense of divine obligation, but rather because I was interested in being a happier person. And as I soon found out, Buddhist morality is very different from the style of Christian morality I had been raised with.

Buddhist morality is founded on a simple principle: causality. Cause and effect. Simply put, every action produces a corresponding result. If there’s a certain result we want, we just need to find out what action leads to that result and behave accordingly. There is no authoritative deity who tells us we must act in any particular way; rather, we recognize that we have full power over our experience. All we need to do is make the choices that produce the results we want. Some choices we make inevitably lead to unpleasant effects, and some inevitably lead to pleasant effects.

It’s in the details of those choices that Buddhist morality starts to resemble the moral systems found in other religions. For example, murder is identified as a choice that produces unpleasant results. So is theft, infidelity, dishonesty, and self-intoxication. The Buddha advises us to avoid these five activities for our own sake – because these five activities inevitably lead to suffering for the person who performs them. The concordant suffering is sometimes immediately apparent, and sometimes it takes a while for it to manifest, but it will always eventually come to be experienced.

So the question is: Why should we trust the Buddha in this matter? The answer is: We shouldn’t – at least, not immediately. As the Buddha says in the Kālāma Sutta (AN 3.66), we shouldn’t believe something just because someone tells us to; instead, we should investigate it for ourselves and see if we can confirm it in our own experience. So we ask ourselves: what is the result of murder, theft, infidelity, dishonesty, and self-intoxication? Do these ultimately lead to unpleasant results for the person who engages in them? If we are honest with ourselves, then we must admit: yes, they do. A person who engages in such immoral acts tends to experience regret, remorse, self-condemnation, criticism and reprobation from others, a bad reputation, and possibly even legal entanglements – in severe cases it can result in fines, imprisonment, or even execution by the government. Conversely, engaging in acts of kindness, generosity, and compassion bring happiness and joy to the mind, praise and commendation from others, and a good reputation.

However, the Buddha says that even beyond such visible results, our choices in this life tend to create corresponding conditions in future lives. For example, in the Cūḷa-kamma-vibhaṅga Sutta (MN 135), he states that killing causes the killer to have a short lifespan in future lives; injuring causes the injurer to have many illnesses and afflictions; displaying anger causes the angry person to be unattractive; stinginess leads to poverty, and so on.

So even if we’re not sure whether or not there is karmic retribution in future lives, it’s a good gamble to act as though there is: if we choose to behave morally, we are happy and well-respected in this life; and if there are karmic results to be experienced in future lives, then we will experience the positive effects of our good choices in future lives as well. This is sometimes known as the Buddhist version of “Pascal’s Wager,” and can be found in the Apaṇṇaka Sutta (MN 60).

A further benefit to morality is that is helps to foster two mental qualities that are very beneficial to meditation practice and to spiritual self-development: self-reflection and self-restraint. In Buddhism an action is only considered to have a karmic effect if it is intentional; thus in considering morality, we are constantly examining our mind and our mental states – looking for the intentions and motivations behind our choices. Choices based on harmful mindstates (such as anger, resentment, jealousy, contempt, and arrogance) lead to harmful effects; choices based on beneficial mindstates (such as kindness, compassion, generosity, and equanimity) lead to beneficial effects. Thus by placing importance on morality, we begin to develop a strong sensitivity to and awareness of our own mindstates. This is self-reflection. And, as we recognize that some choices are harmful, then even if we really want to do them we restrain ourselves: we let go of those desires, thus developing renunciation – which is founded on the recognition that happiness is not dependent upon always getting what we want or doing what we want. Thus we develop self-restraint and contentment; this is a direct antidote to craving, which is a very unpleasant state of mind.

Now that we have some idea of why morality is useful, let’s examine the five basic moral precepts in Buddhism a bit more closely.

The first one is “not killing.” This means not killing any sentient being; especially humans, but also animals of all kinds (including insects), and any spirits or non-physical beings that might exist. We develop and maintain a genuine wish for the happiness of those beings and respect their desire to live; this wish for the happiness of others is a direct antidote to hostility and cruelty – which are very unpleasant states of mind.

The second one is “not stealing.” We acknowledge that others have things which they possess, and we choose not to inflict the pain of loss on them – we choose not to steal from them. By respecting their property, we develop a sense of happiness in the prosperity of others; a pleasant state of mind that directly counters envy and jealousy – which, once again, are very unpleasant states of mind.

The fourth one is “not lying.” Most of us have had the experience of being lied to, or of lies being told about us, or of various harmful consequences of dishonesty. Recognizing the harm that comes from such behavior, we maintain a commitment to truth. However, as explained in the Abhaya-rāja-kumāra Sutta (MN 58), it is still important to consider the effects of our speech, using the following criteria: first, say only what is true; second, say only what is beneficial; and third, speak only at the right time. So we might have a true statement that is harmful (such as “You’re ugly” or “I hate you”); or we might have a true statement that is beneficial but it is not the right time to say it (such as a reprobation for someone’s inappropriate conduct, delivered at a time when they are already angry and thus unlikely to be receptive to constructive criticism). Instead we wait for a time when our statement can be heard and received in a manner that is useful to everyone involved.

The fifth one is “avoiding self-intoxication.” Buddhist practice is based upon clear awareness of the present moment. It is this clear, unbiased awareness that gives us the information we need to determine which choices are helpful and which ones are harmful. When the mind is foggy and unclear (as when it is intoxicated), mindfulness becomes weak, and it is hard to clearly see what’s going on in our minds. It’s hard enough when we’re sober; intoxication makes it far more difficult. Further, when we are intoxicated, our self-restraint tends to be much weaker; we are more prone to acting impulsively and unwisely. We are much more likely to fall prey to our baser tendencies and engage in unwholesome behavior – such as lying, stealing, infidelity, and violence. Even small doses of intoxicants (such as one glass of wine) tend to cloud the mind and weaken our inhibitions, and thus it is best to completely abstain from such things. If one has a genuine medical reason to take an intoxicating medication, then one should still be very careful to examine one’s motivations in using that medication, and to minimize its use as much as possible – and to stop use altogether when it is feasible.

That said, we’re not required to follow any of these principles. In Buddhism there is no obligation to do anything. Instead there is a simple guideline: If you want to be happy, the Buddha explains how you can do it – meditation, self-reflection, renunciation, and moral principles. So we can take on these guidelines – as I did – and see for ourselves the contentment and joy that arises in our lives.

Would you like to read more? You can find more writings by Bhante Suddhāso on www.bhantesuddhaso.com