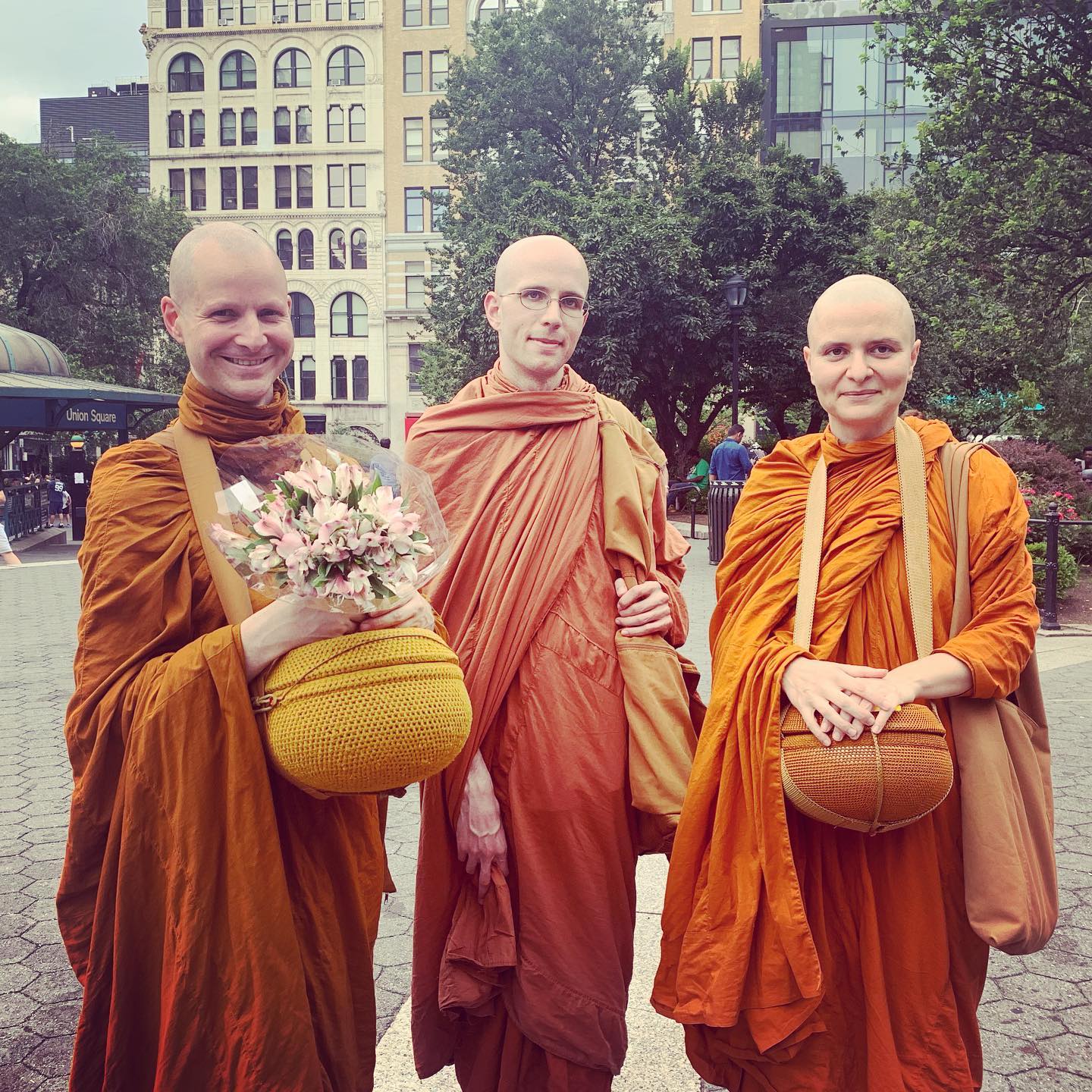 Relationships with food are often complicated. On the one hand, we need nutriment to sustain ourselves, so we cannot completely abstain from it; on the other hand, this daily consumption easily creates room for craving and clinging to appear in the mind.

Especially in these times of pandemic, when we are locked up in our homes, deprived of most sensual pleasure, food can easily become what we perceive as one of the few reliable sources of entertainment.

When this pattern manifests, it is good to start by watching our actions without judgement. This is in an opportunity to study how our mind works, to familiarize ourselves with the workings of craving. For example, how each time we open the fridge we think that eating will make us happy. While we eat, pleasant sensations arise. The craving for more pleasant sensations leads to overeating. After we are done eating, the pleasant feeling has ceased and unpleasant feelings have arisen in its place. We perhaps commit not to do this again, but then we are back at it, with the delusion that fulfilling our desire is going to make us happy and full. But what we end up being full of is Dukkha – suffering: unpleasant bodily feelings mixed with remorse and regret.

This process is quite fascinating, as it represents in a nutshell what cyclic existence is. We repeat the same action over and over again, with the delusion that the result will be different. By doing something repetitively we build such strong habits that it’s very difficult to snap out of them. We might even start identifying with these habits and think that they are who we are, and that they will always be with us.

We repeat the same action over and over again, with the delusion that the result will be different. By doing something repetitively we build such strong habits that it’s very difficult to snap out of them.

The good news is that the Buddha told us that this state of suffering is impermanent and it is not who we are. And the even better news is that the Buddha gave us the recipe on how to deal with it and ultimately transcend it, once and for all. He not only told us that this is possible, but gave us actual instructions for getting out of suffering and for replacing unwholesome habits with wholesome habits.

To address the specific habit of overeating, I would like to analyze the behavior of deer described by the Buddha in the Nivāpa Sutta (MN25).

Here at Empty Cloud Monastery we are surrounded by deer. Since in the past decades humans have gotten rid of most of the deer’s predators (coyotes, wolves, etc.), there is an overpopulation of deer – so, unfortunately, the town periodically hires hunters to lure them into the reservation close by with some food bait, and then cull them.

This setting is similar to the Nivāpa Sutta, where the Buddha describes four groups of deer dealing with food bait laid out by hunters, and draws parallels to the behavior of spiritual practitioners.

In the Sutta, the first group of deer is described as stepping right into the food bait, and after seeing the abundance of food, becoming completely overcome with craving and mindlessly indulging in eating all the food while becoming negligent of any harm that can happen to them. If you know deer, you’ll know that they’re usually very alert, always on the lookout for predators. But you can see how, when surrounded by temptation, they can – just like us – lose all sense. The Buddha tells us that, in the same way, if monks surround themselves with sensual pleasures and all their temptations – in essence, Mara’s bait – they will inevitably become engrossed with them, lose mindfulness, and ultimately get overtaken by saṁsāra. In the context of dealing with food in every-day-life, this is very similar to the approach of going to the store and mindlessly purchasing anything we desire – like ice cream, chips, and junk food of all sorts – but then expecting to not succumb to temptation when in front of the fridge. The reality is that once we see all these things in front of us, we will lose any self restraint we have cultivated and fall completely into temptation, cultivating the conditions of a hungry ghost – a small mouth with a giant stomach, never capable of being full.

The second group of deer, on the other hand, understanding the tricks of the hunters, retreats in the middle of the wilderness, eating frugally while away from all temptations and the bait. But once the seasons change and food scarcity ensues, they get closer and closer to the bait, and as soon as they see the food, they become enthralled with it, succumbing to it immediately and ending up no different than the first group. In monastic life this could be equated to living in the wilderness as a wanderer for a long period of time, without seeing anything enticing or talking to anyone interesting. When we see anything we like, we will lose mindfulness, because all we have practiced is abstinence – we haven’t practiced renunciation. This is similar to fasting for long periods of time, depriving ourselves of food, or going on very strict diets of perhaps only fruit juice, only veggies, no sugar…. Then as soon as the diet is over, we see something enticing, like a loaf of bread, or a giant pizza, and we will lose all of our mindfulness and swallow the whole thing up.

The third group of deer, having seen the other two groups succumb to the hunters, decides to go and live far enough and close enough to the food bait, and periodically eat small amounts in moderation while being alert and in complete mindfulness. They outsmart the hunters, until the latter, by observing them closely, discover their dwelling place and catch the deer. The parallel with the monks, is some who live not too close to the city, but not too far from the city, in the outskirts perhaps, where they can get most of their needs met, but at the same time stay away from all the temptations of sensual pleasure. Yet Mara finds its way in, and the monks start debating and attaching to views (i.e. “Theravāda is better than Mahāyāna,” “The Buddha exists or doesn’t exist after death,” etc.) instead of working to dispel suffering. This perhaps can be equated to having a balanced diet, without too many restrictions, but also not too much sensual pleasure, and eating mindfully. Thich Nhat Hanh has lots of incredible ways to support this practice of eating mindfully: using your left hand to eat if you are right-handed, or eating only one spoonful at the time, chewing thoroughly each mouthful, and only picking up the spoon again once one has swallowed. At first, we’ll see that our tendency is to start picking up the next spoonful, before we’ve even chewed and swallowed the first, but as time goes by, we’ll get better and better, and get more in sync with what our nutritional needs are rather than our desires. Yet even here one can get so opinionated with food: such as thinking gluten is bad for you, or thinking this type of cuisine is better than the other – and get very obsessed with food once again. That’s how Mara finds its way in, and then we quickly backslide.

So the goal is to STOP being obsessed with food. So how do we do it?

In the sutta we see that the fourth group of deer acts very much in line with the third group of deer, but finds a safe dwelling place where the hunters can’t find them. So the hunters decide to avoid them altogether, in order to not disturb and scare away the deer from the first three groups. In the same way, the monks find a safe space from Mara: the Jhānas. In developing Samādhi they are free from the hindrances. In this way we can see how developing a steady mind, a concentrated, a one-pointed mind, is not only useful, but indispensable for keeping our resolutions, and ultimately for transcending all suffering.

This article is an excerpt from a talk given on YouTube LIVE.