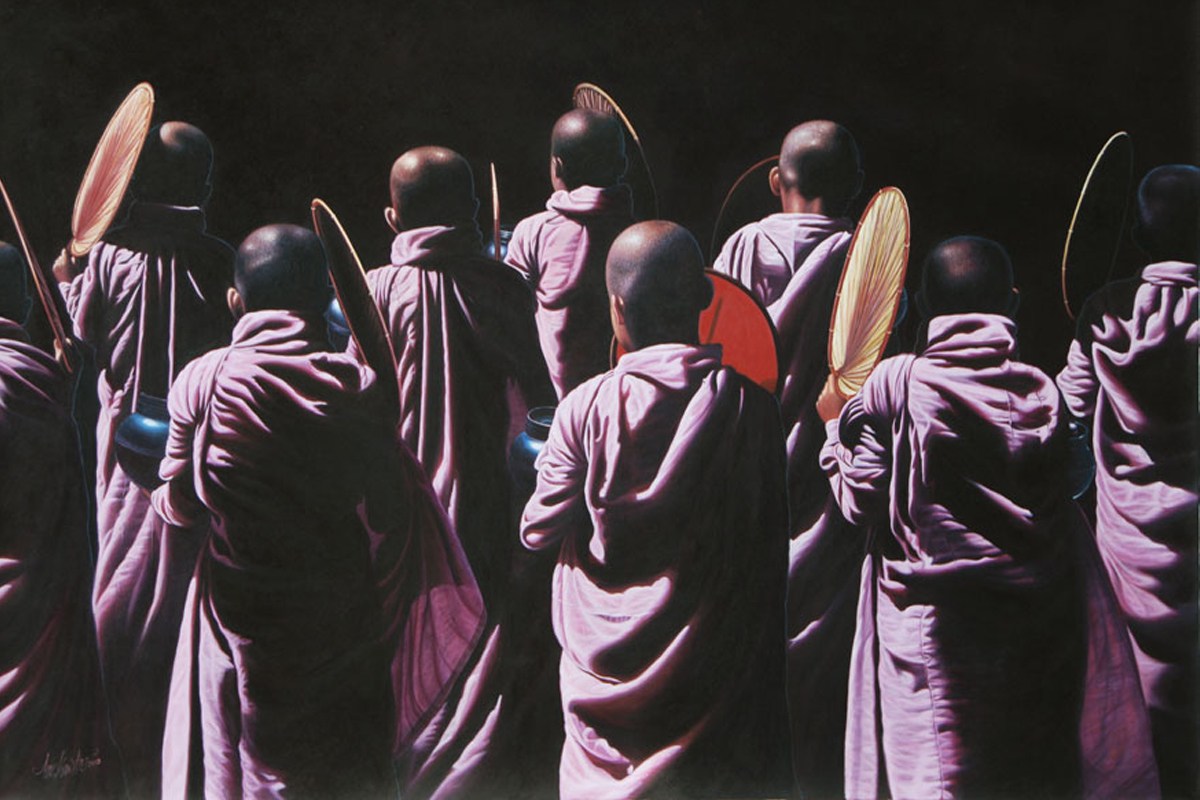 I have known the Myanmar artist Aung Kyaw Htet for around fifteen years, since the time his daughter was born. He came from a humble beginning, growing up in the Delta Region which is regularly flooded and where rice is the staple crop. Aung Kyaw Htet moved to the capital Yangon to realize his dream of becoming an artist. As with many other Myanmar people, he is an ardent follower of Theravada Buddhism as it is practiced in Myanmar. His art (a glimpse of which one can have in a group show at Agora Gallery in NYC until June 9th) has been profoundly influenced by Buddhism and his experiences with monastic life; much of it portrays Buddhist imagery, such as monks and nuns, often with expressionistic or ethereal backgrounds. We sat down to discuss religion and art prior to his temporary ordination with his son. He and his son plan to be temporarily ordained just after his wife and daughter, and will remain as monks for about ten days.

Why did you decide to ordain?

In Myanmar it is common to be ordained at different periods in one’s life. I have been temporarily ordained before, one time as a child novice and another time as a young adult. Both times happened in my village, which is located in the Delta Region of Myanmar. I spent about one month each time as an ordained monk, and I lived in a monastery for some time to study. In rural areas of Myanmar, the monastic education encompasses Buddhist studies, but also reading, writing and general education; since many villages did not even have a primary school, the monastery functioned as one. The downside is that girls were not admitted to the education is the same way as boys.

Does this apply to women as well?

The Theravada Buddhism practiced in Myanmar is similar to what is practiced in the neighboring countries, in Thailand, Cambodia, Laos and Sri Lanka. Though I think because of Myanmar’s isolation over the years, that practices here have retained more of their original ways. Nuns are being ordained in Myanmar, while in Thailand nuns do not officially gain recognition in the same was as monks.

My wife and daughter were recently temporary ordained as nuns for a brief period of ten days. This is the first time they have been ordained; seeing my wife and daughter as nuns, I feel peace of mind, as I know they are spending time in the meditation center where they can develop their minds in a beneficial way and gain the right kind of knowledge.

Do you practice meditation in your day-to-day life?

Yes, I do. Meditation practice influences my creative process by making me more able to focus on what is essential in life.

What is the relationship between creativity and spirituality?

The relationship between creativity and spirituality is channeled through a trust in Buddhism and that art can aid in spiritual development. Think of metaphorical paintings, narratives, and frescoes, as well as music and scriptures. Various art forms contribute to the Buddhist culture as well as drawing attention and focus to the essentials of Buddhism.

What moves you to depict Buddhist tradition through your artwork?

I love the simple lives of monks and nuns. A simple life means living in modesty and turning away from greed. Monks and nuns  only need a little food and few other amenities to sustain their life style. This is what I call a simple life. This manner of living creates peace of mind. I gain inspiration from them to depict Buddhist traditions through my artwork; I focus on my subjects and their Buddhist inspiration and way of life. Then I apply my own way of painting and change the colors and movements in a way I find appealing and attractive. Yes, life is suffering, but we also need beauty.

Can you describe your creative process?

I observe monks, novices and nuns keenly; the way they behave, dress, and move. I take photos sometimes, though I prefer to paint them in real life situations. I have learned a lot from senior monks and from studying with them:

Long is the night to him who is awake.

Long is the road to him who is weary.

Long is samsara to the foolish,

Who know not the sublime Truth.